On a petrol injected engine with a suspect fuel related problem, it is important to correctly determine if the fuel supply and fuel pressure is adequate for correct engine operation. “Guessing is not an option”.

With so many areas of the fuel system susceptible to faults that can cause reduction in fuel flow and pressure, the technician must not only find and repair/replace the affected area or component but also the cause of the fault as this generally eliminates an expensive break down tow bill and upset customers.

When it comes to the fuel pressure regulator, it is important to identify its location as this will determine if manifold vacuum plays a part in fuel pressure control.

1. An EFI system with an FPR mounted on the fuel rail utilises manifold vacuum to minimise operating fuel pressure variations. 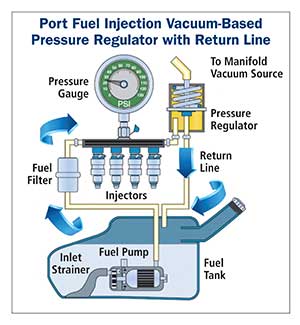 Typical faults found with this system:

2. An EFI configuration with a common returnless fuel system utilising an FPR mounted on the fuel pump assembly with no vacuum assistance. 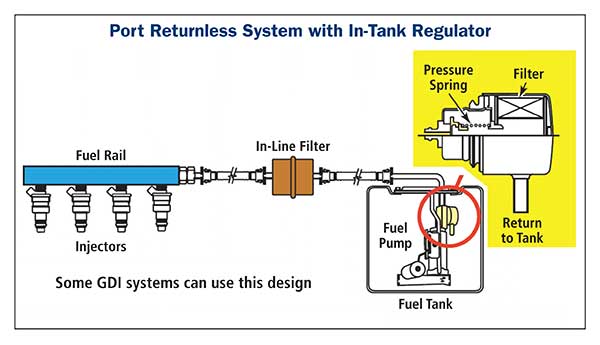 This system pressure is maintained at a constant level with reference to the surrounding pressure. (no vacuum effect on the FPR). This needs to be considered and must be taken into account when the injection duration is calculated.

Typical FPR faults found with this system – Incorrectly fitted FPR resulting in internal fuel pressure loss and creating a low fuel pressure with prolonged cranking engine starts is the most common fault. This may be quickly diagnosed by the instant loss of residual pressure as soon as the fuel pump stops. Note: Even though there may be other FPR faults found on many of the assemblies, these may not be serviced separately.

3. An EFI configuration with the FPR integrated in the In-line fuel filter and return hose back to fuel tank. (Generally found on some European vehicles) 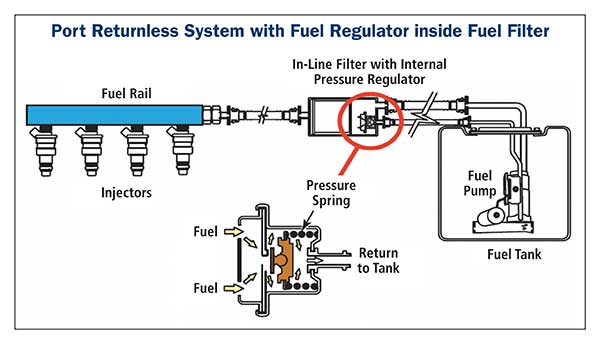 This FPR is regularly replaced when the allocated service is due or generally when the fuel pressure is not within specifications due to contamination of the fuel. 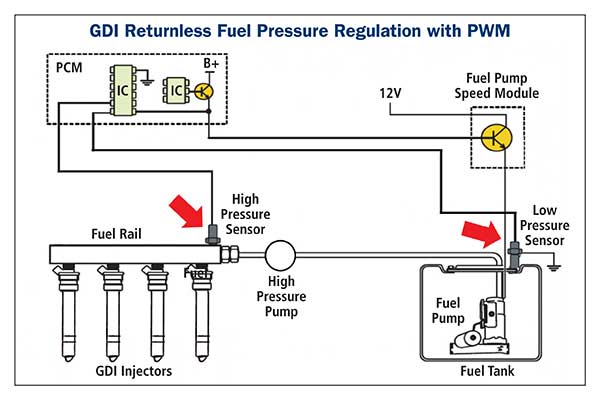 The operating pressure on this system is much higher than a conventional EFI configuration. A high-pressure mechanical fuel pump that is generally driven by the cam shaft supplies the fuel rail with a varying fuel pressure on some systems up to 350 Bar. The pressure regulation occurs in the high-pressure fuel pump but an in-tank fuel supply module (pump assembly) with integrated fuel level sensor and fuel filter supplies the high-pressure pump with the required amount of fuel at a varying pressure of up to 6 Bar that is PWM controlled by the ECM.

A typical low-pressure control circuit on a VE Commodore SIDI utilises a controller located next to the battery. 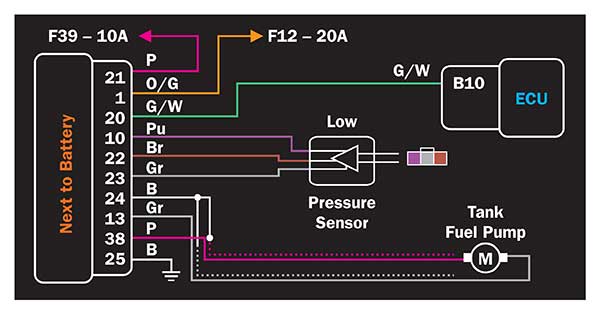 Note: The use of Ethanol fuel is another factor to consider when fitting an adjustable replacement regulator or fuel pump. Ethanol has an effect on some internal Component materials. 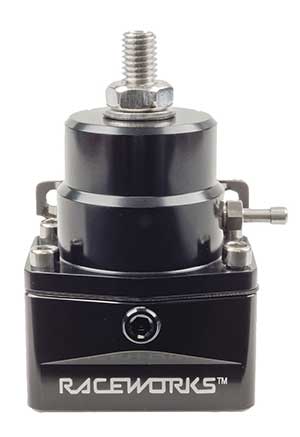