What technicians need to know about mechanical carburettor fuel pumps to ensure fuel flow and system pressure is suitable to ensure the correct fuel levels are maintained in an operational carburettor.

There are of course many vehicles still on the road retaining this now old technology factory fitted style mechanical pumps, but maintaining these vehicles can become a challenge without access to the correct replacement components to keep somebody’s treasure still on the road. 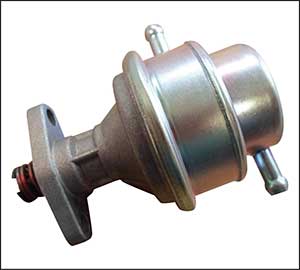 To be covered: The most common style and the one shown below is a lever or rocker arm operated unit that moves the internal rubber diaphragm in an action that causes high- and low-pressure conditions to transfer fuel from the tank and force it under pressure to the carburettor as required.

The rocker lever continuously contacts and is generally moved by a camshaft mounted and rotating eccentric lobe as the engine rotates. This does not mean that the fuel pump will continually pump fuel even when the carburettor float chamber is at its full limit. The design of the pump allows for movement of the rocker lever without physically “continuously” moving the internal diaphragm in a pumping action until the fuel volume reduction in the carburettor and pump allows the pump diaphragm and lever again to contact and move together to transfer more fuel to the carburettor.

Insufficient or excessive fuel supply to the carburettor may or may not be caused by the mechanical fuel pump.

Note: Physical pump operation by hand can assist technicians in determining source of low fuel supply. A pressure gauge in the fuel line can check the supply pressure from the pump but be aware that many carburettors may operate at different fuel pressures and fuel flooding may result if the needle and seat inside the carburettor cannot control fuel flow under pressure from the fuel pump. Ensure pump is the correct type.

Fitting an “inline fuel filter” in an incorrect position may affect engine running during certain driving conditions. That is- the filter must always be placed on the output location of the fuel pump and should filter the fuel to the carburettor. Fitting a “filter” on the intake of the fuel pump will restrict fuel flow.

Note: “strainers” may be found on the intake location of the fuel pump, but these are much less restrictive to fuel flow (when new) than fuel filters.

Note: to ensure fuel flow is sufficient on larger capacity engines, a low pressure in tank electric feed pump is utilised to supply fuel to the mechanical fuel pump.

Typically, the pre- fuel injected Holden Commodore series utilises this system as standard on V8 motors. Testing the in-tank pump is also a requirement when carrying out total fuel flow and pressure tests.

The pump operation of the 3-pipe mechanical fuel pump is similar to the 2-pipe unit but included Is a return to the fuel tank of fuel generally through a fuel- vapour separator for emission requirements. This is a very commonly used mechanical fuel pump.

Very early pre- electric wiper systems utilised a vacuum source as a means of operating the wiper blades. This vacuum source may originate from a separate chamber from the mechanical fuel pump. These are becoming very rare.

Many of the specific repairs on these earlier vehicles are carried out to maintain the originality of the vehicle. There may be situations where the originality is not a viable proposition due to the lack of parts accessibility or cost restrictions due to excess mechanical damage preventing the use of preferred components.

Typically, an eccentric pump drive lobe damage on the camshaft may force the use of a low-pressure electric replacement fuel pump instead of major engine mechanical work.

Note: in this case, it is important to ensure the electric fuel pump is “relay wired” (or similar) in a way that the fuel pump will only operate when the engine is running only. A fuel pump that continuously delivers fuel in an ignition on position, may create safety issues in a major traffic accident situation with fuel line damage.

Engine replacements for performance upgrades generally require high performance electric fuel pumps to be utilised for the correct fuel supply to suit the engine requirements from a carburettor system.

When you supply and fit products from Premier Auto Trade you can expect a product designed and tested to the vehicle manufacturer’s specifications offering OE form, fit and function. Premier Auto Trade distributes products throughout Australia via a network of specialised resellers and leading automotive groups.